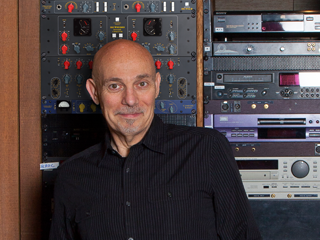 Curve Bender EQ and Zener Limiter among his favorites

Los Angeles, CA – May 2013 … When it comes to the intricacies of the recording studio, multi-Grammy® Award winning producer/engineer Joe Chiccarelli certainly knows the ropes. With a discography that includes a diverse and impressive group of artists, including Beck, U2, Elton John, the White Stripes, the Shins, The Strokes, The Killers, Tori Amos, and Morrissey to name but a few, Chiccarelli knows what it takes to bring out the best in a performer. With a track record of this caliber, it comes as no surprise that Chiccarelli has strong opinions about the studio gear he uses. And when the subject of signal processing arises, Chiccarelli is clearly very fond of his Chandler Limited equipment.

“I’m a big fan of the Chandler Curve Bender EQ,” states Chiccarelli. “I use the Curve Bender on the stereo buss of all my master mixes. I’ve used this processor with the White Stripes, the Shins, as well as the most recent Jason Mraz recording. I love the click-stop detented controls because they make it easy to experiment with the sound and, if I want to get back to a previous setting, it’s easy to return. Most significantly, the Curve Bender has a sound that is strikingly similar to the original units found at Abbey Road Studios, but with far greater flexibility. I love the punchy, aggressive tone of this equalizer.”

Chiccarelli was equally complimentary of Chandler’s Zener Limiter. “The Zener Limiter is used as a parallel compressor drum buss for mixing,” he explains. “I also use it on my drum room mics when I track live drums. For rock ‘n roll, the drum sound is critical—and this piece makes a huge difference to the sound. By using this compressor on the room mics, I can more effectively bring out both the tone of the instrument and the character of the room. The Zener Limiter is a great tool for bringing out the depth of the drum sound. The Zener is an aggressive compressor that is not only great for drums, it also works well on piano and is very useful for getting big sounding vocals.”

In addition to his frequent use of both the Curve Bender and the Zener Limiter, Chiccarelli was also very complimentary of Chandler Limited’s new guitar stomp boxes. “Both the Chandler Germanium Drive and Little Devil Colored Boost pedals have a sound like nothing else on the market,” he says. “These pedals aren’t overly ‘gainy’, nor are they noisy like many guitar pedals frequently are. The build quality of these products is stunning. It’s this high level of attention to detail that makes these pedals every bit as valuable in the studio as the Chandler rack mount signal processors.”

Quality customer service and technical support are critical concerns for someone of Chiccarelli’s stature and, here too, Chandler Limited never disappoints. “I have never had a major issue with any of my Chandler products,” he explained. “Occasionally, any piece of gear can develop issues and that’s when fast turnaround time is so important. On that note, I’ve always found the company to be extremely responsive.”

Before shifting his focus to the business of the day, Chiccarelli offered these final comments, “Chandler is building some of the most exciting products on the market. The tones are retro and thick—but with the sheen and clarity of modern high end preamps, so they fit perfectly into modern recordings. Once you’ve mastered a Chandler product, it can be as invisible or highly noticeable as you want. The products feature top quality build and have lots of color and tone. They are perfect for rock or any recording project that needs character.”

To learn more about the services of Joe Chiccarelli, contact him through his management firm, Next Wave Entertainment, LLC at www.nextwaveentertainment.com.