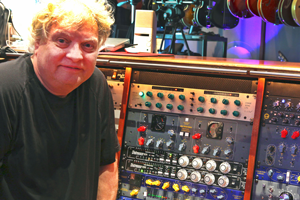 Nashville, TN – September 2013 … In the world of hard rock and heavy metal music, few engineers or producers have the pedigree of Michael Wagener. Wagener’s discography reads like a Who’s Who of big name artists. He is, perhaps, best known for his work with heavy metal rocker Ozzy Osbourne, but his list of accomplishments only grows from there and includes albums with Mötley Crüe, Dokken, Great White, Metallica, Poison, and Alice Cooper to name but a few. Fast forward to his more recent projects, and you’ll find new or forthcoming albums from Station, Finnish rockers Lordi, Wolfbane, Marija and Shadowstalk—and central to the production of all these recordings is a healthy dose of analog signal processing from Shell Rock, IA-based Chandler Limited.

As a producer, engineer, and owner of WireWorld Studio, Wagener is one very busy individual. If he’s not in the studio recording and engineering a project, he’s likely there in a different capacity as the host of Production Workshops, where he trains recording engineers from all over the world. In either capacity, Wagener’s work involves a lot of Chandler Limited equipment, including the TG2 Pre Amp/DI, the TG Channel MKII, the Germanium Pre Amp/DI, the Zener Limiter, the Curve Bender equalizer, and the Little Devil Compressor.

Wagener considers Chandler Limited’s signal processing equipment to be central to much of his work. “My TG2’s [microphone pre-amplifier] serial number is 002,”he reports. “I’ve been working with Chandler products since 2002 and I love every one of them. Since getting my first two pieces of Chandler gear—the TG1 and TG2—Chandler equipment has been on each and every recording and mix I’ve done.”

Chandler Limited signal processing equipment is highly regarded for its ability to add the ‘warmth’ of analog to today’s digital recording process. Several of the company’s processors are modern day recreations of equipment that made London’s legendary Abbey Road Studios a popular recording destination for leading artists and engineers during the late 60’s and early 70’s. When queried about those aspects of Chandler Limited’s equipment that separates it from the competition, Wagener offered the following, “It’s not so much about the features of the TG2—even though I love the impedance switch—but it’s the sound that I love. All the Chandler gear has that sound. To me it’s the best ‘new vintage’ sound on the market. Wade [Goeke] (Chandler’s owner and chief engineer) and I must have exactly the same taste in sound, he nails it every time.”

When asked which of his Chandler products he considers his favorite, Wagener responded, “I really don’t have a favorite, as I love them all. I must admit, however, that when it comes to a piece that I absolutely could not live without, I’d have to say it’s my TG2.”

In addition to the classes he teaches through his own Production Workshops, Wagener will also be conducting seminars during the forthcoming Nashville Amp Expo (www.nashvilleampexpo.com), which is scheduled to be held at Nashville’s Hotel Preston on September 6 – 8. Here, Wagener will be sharing a variety of tips and tricks he’s acquired over the years and, as part of this effort, he will be focusing on the use of microphone preamplifiers and compressors. During this seminar, attendees will gain a first-hand perspective on how Wagener uses the Chandler products such as the TG2 Pre Amp/DI and the TG1 Limiter to capture challenging signals while recording. Attendees are encouraged to visit Chandler Limited to check out the GAV19T guitar amplifier, the Germanium Drive, and Little Devil Colored Boost guitar pedals.

For any studio professional operating at Wagener’s level, quality customer service and technical support are crucial and here too, Wagener considers Chandler Limited to be best-in-class. “Awesome is how I would describe their support,” says Wagener. “On the rare occasion that I actually encountered an issue, I had my unit back within days. Wade took care of it as soon as it arrived at his shop. Chandler Limited is comprised of great people and great service, which goes right along with the great products!”

Before turning his attention back to his work in the studio, Wagener offered these final thoughts, “I can highly recommend anything Chandler makes. I have been very happy with the gear I’ve purchased and it has become a very important part of my sound.”

To learn more about Michael Wagener, visit him online at www.michaelwagener.com.