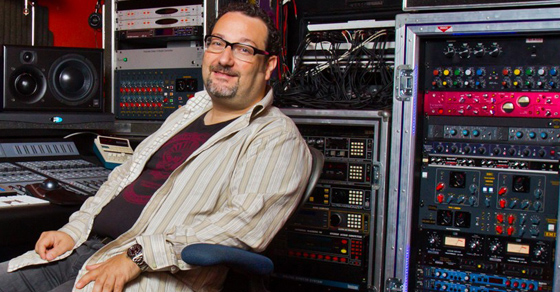 Los Angeles, CA – October 2013 … With the advent of digital recording and mixing, tremendous strides have been made in areas such as snapshot and dynamic console automation. And while nobody wants to return to the days when re-setting a mixer for either a concert or studio project required lengthy preparation, everybody seems to agree that analog equipment had an inherent warmth that digital lacks—hence the popularity of tube equipment, ribbon microphones, and the like. Perhaps nowhere is this preference for analog warmth more evident than with the work of studio and live mixer Paul David Hager, who finds his TG1 Limiter and Zener Limiter from Shell Rock, IA-based Chandler Limited to be an essential part of his toolbox.

Hager has engineered and mixed records for numerous superstar artists, including the Goo Goo Dolls, Hoobastank, Van Halen, Katy Perry, Miley Cyrus, Demi Lovato, Blondie, Devo, Selena Gomez, and the Jonas Brothers to name but a few. Similarly, he has mixed FOH (Front of House) on tour for an equally impressive roster of artists, among them Devo, Miley Cyrus, the All American Rejects, and Avril Lavigne. With a track record of this caliber, Hager can choose any signal processing gear he fancies, but when bringing analog warmth to the digital mix is critical, he counts on his TG1 Limiter and Zener Limiter. He discussed the attributes of Chandler’s equipment.

“I’m a big fan of the analog sound,” Hager explains. “It helps give digital back some vintage qualities associated with analog gear, and this is extremely important these days, as most mixing—be it live or in the studio—takes place in the digital domain. I typically use the Chandler TG1 Limiter on guitars and I really like using the Zener Limiter while mixing the drum sub group. With the TG1, I insert the processor on a group that all the guitars go to and then blend it back into the mix. For the drums, I essentially use the same process, inserting the Zener Limiter on a group that has all the various drum kit signals and then blend that back into the mix.”

Hager further explained how these processors fit into the picture. “When I was with the Goo Goo Dolls, we used four TG Channel MKIIs and four LTD-2 Compressors on all the acoustic guitars for their primary inputs,” Hager reports. “From the stage perspective, these units give the acoustic guitars a warm studio-like quality and we’ve received lots of compliments on how the band sounded though the years. I remember a tech for a big name act famous for the acoustic guitar work of the primary artist, hearing our show and just freaking out about the acoustic sound. When I told him we were using Chandler Limited TG1’s, I believe he ordered a bunch the next day!”

“With live sound, particularly for drums,” Hager continued, “the Zener Limiter gives me back the punch of the drums that a digital compressor cannot. The Zener really ‘smoothes’ out the sound of digital.”

Whether he’s in the studio or out on tour, Hager needs to know that if he has any questions or requires support of any kind, he can count on his equipment manufacturer to have his back. On that note, Hager speaks very highly of Chandler Limited’s customer and technical support services. “Everyone at Chandler Limited has always been great to deal with,” he says. “I’ve been using their gear since 2003. In my opinion, they are one of only a few companies that really takes pride in everything they do and make.”

Before turning his attention back to the business of the day, Hager offered these final thoughts on his experience with Chandler’s equipment. “For anyone interested in using Chandler Limited equipment, I would encourage them not to hesitate and try out the particular piece of gear that interests them. Without question, Chandler gear speaks for itself. I don’t know anyone that I’ve ever turned on to Chandler equipment that hasn’t been impressed. Once they see what it can do, they always end up buying more.”

To learn more about the services of Paul David Hager, contact his management company, McDonough Management, LLC, at frank@mcdman.com.