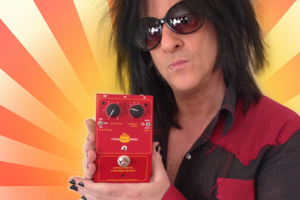 Guitarist / songwriter Steve Stevens knows that crafting the right sound is critical to the success of any performance. Possessing a resume that includes stints with high profile artists such as Billy Idol, Michael Jackson, and Vince Neil—along with his contribution on the Grammy® Award winning soundtrack to the wildly popular film Top Gun—Stevens’ ability to get the right sound is a skill that’s been fine-tuned to a very high level. In addition to strong playing technique, another critical element of his sound is achieved through signal processing. That’s precisely why Stevens looks to Shell Rock, IA-based Chandler Limited for some key hardware to shape his sonic signature.

Chandler’s Little Devil Colored Boost and Germanium Drive guitar pedals have been integral to Stevens’ sound for approximately two years. The Little Devil Colored Boost pedal can gently color one’s amp or drive it into oblivion. Its six presets range from slightly fuzzy to an ‘in your face’ Plexi sound—with each preset having its own style of harmonic distortion and clipping using different effects on a sine wave signal. According to Stevens, “The Little Devil has a very ‘organic’ sound, and Chandler’s experience building high quality studio gear is reflected in this pedal. It has a unique ability to complement your sound—it’s very pleasing. The Little Devil does a great job of making your sound big, and its distortion is very musical, as opposed to some other pedals, which can be pretty harsh.”

Commonly known as ‘stomp boxes,’ guitar pedals frequently take a beating under the crush of a player’s foot. “Chandler pedals—like all their gear—are built like a tank,” says Stevens. “When I step on those pedals, I know they’ll be ready! The build quality of their equipment is fantastic. I’ve also been impressed with the pedals’ ability to ‘play well’ with other equipment. I’ve never had any issues whatsoever patching these pedals into my signal chain. I’ve used them both before and after other pedals and they work really well—no matter what order they’re in.”

Stevens was equally complimentary about Chandler Limited’s customer and technical support services. “I had ordered my pedals online,” Stevens explained “and I had a question about the power supply, so I emailed the company. Wade Goeke (Chandler’s owner and chief product designer) had no idea I had recently purchased them through a dealer, nor did he know who I was at first. Wade’s responsiveness and overall level of support was terrific, which goes to show that Chandler’s excellent support services are universal—it’s not just preferential treatment for those who endorse their products. Wade couldn’t be any cooler to deal with.”

Before heading out for a studio call, Stevens reflected on his experience using Chandler Limited products. “I couldn’t be happier with my Chandler equipment,” he said. “I leave for another Billy Idol tour this coming July and my Chandler pedals will be on stage with me every night.”