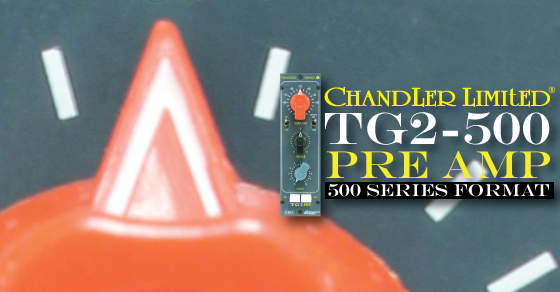 Using the identical TG2 circuit, transistors, and transformers, the TG2-500 delivers 10 – 60 dB of gain and uses a coarse gain control and a fine gain control as found on EMI consoles. The unit provides 300 and 1200 Ohm input impedance as on the TG2, which the company’s customers have come to value.

Equally important, the Chandler TG2-500 delivers frequency response identical to the TG2. Equally notable, the TG2-500 has the same high frequency bump and mid forward tone that users enjoy with the TG2, along with the warmth inducing distortion which contributes to its sound. The end result is a creamy, smooth tone with a surprisingly open, clear top end. The sound, as explained by many users, has the ‘warmth and punch’ of the Neve, but with a nicer, expanded top end.

Chandler Limited owner and chief product designer Wade Goeke commented on the company’s new TG2-500 Pre Amp, “The TG2-500 is a product we’ve been asked about for a number of years. In the past, I always commented that I had not yet found the right way to engineer this unit in the 500 series form factor. Now, I’m pleased to report that, after working on this challenge for quite some time and attempting a number of different methods in the process, I’ve made everything work to my satisfaction. I’m glad I was patient because I genuinely believe our users will be pleasantly surprised and very pleased with the results!”