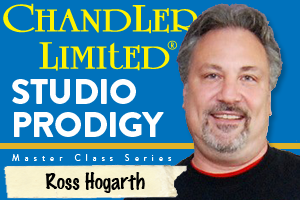 The Studio Prodigy | Master Class Series is an ongoing series of training sessions—with this second session featuring producer / mixer / engineer Ross Hogarth. The class is scheduled for Saturday, May 4, 2013. Titled ‘Whatever Works,’ the master class with Ross Hogarth is geared toward advanced students, musicians, composers, and working engineers. The program requires an in-depth knowledge of audio terminology, DAWs, and the mixing process. The master class will take place at Universal Mastering Studios in Los Angeles. Session Two | Whatever Works is scheduled to run from 10 AM to 6 PM. Every Studio Prodigy Session concludes with time for a Q & A period with the hosts. Refreshments will be served.

Known for his ability to work with a wide spectrum of musical genres, Hogarth has an extensive discography. Recent album credits include Steve Lukather’s Transition, Van Halen’s A Different Kind of Truth, as well as albums for the Sick Puppies, John Mellencamp, Ziggy Marley, and numerous additional artists.

Hogarth commented on the nature of the upcoming master class, “Being that there is very little mentoring in our industry, this is an opportunity for people like Ryan Hewitt, myself, and others to share, or pass on, some of the tips and tricks we’ve learned from our own studio experiences. The goal is to help those up and coming studio engineers learn useful mixing and production techniques that will, hopefully, enable them to further their own careers. The various instructors in this program each have their own unique approach when it comes to addressing studio-related challenges. My approach has always been, ‘Whatever works,’ and, hence, the name of this particular class. My goal is to impart knowledge not only from a technical perspective, but also in terms of how one thinks as they approach a given production task.”

As part of the master class, attendees can learn more about the latest equipment from the session sponsors. Hogarth has a long, rich history with Chandler Limited and uses several of the company’s products in his production work. Among his many Chandler Limited products are the Little Devil Colored Boost pedal, the TG Channel MKII, TG1 Limiter, TG2 Preamp / DI, and the LTD-1 EQ/Pre Amp—all of which have been used on the albums Hogarth has engineered. “I have a very close relationship with Chandler’s Wade Goeke and his products have been a tremendous asset in my work. We have a deep appreciation for each other and we learn from one another. I’ve been using the company’s products from the very beginning and they are an integral part of my studio efforts. I’m certain these products will be of considerable interest to the attendees of this class.”

Wade Goeke, Chandler Limited’s founder and company owner, commented about the Studio Prodigy Master Class— Session Two | Whatever Works. “This class with Ross Hogarth is an invaluable opportunity to learn from one of the best audio engineers in the industry,” said Goeke. “Music production at the uppermost level involves a unique combination of technique and insight into the big picture. Ross is one of those incredibly gifted people who has both. I’ve always felt honored that he chooses to use our products in his studio endeavors and I’m confident the knowledge that he passes along to those in attendance will be well worth the price of admission.”

“It’s very important to me that those people who attend this class carry away useful information that can help with their own studio projects,” Hogarth summarized. “I want to ensure that when a person asks a question, they get an answer that will help them address that particular issue in a useful manner. My goal is not to speak at those in attendance, but to speak to them and help them learn—in other words, interact with each student on an individual basis. This is an industry about being flexible in order to accomplish a variety of creative goals and my aim is to further that philosophy.”

Tickets for each session will be limited to 25 participants and are available at $500 each. Tickets are available Studio Prodigy's website.

For additional information about the Studio Prodigy Master Class Series, go to http://studioprodigymcs.com or visit on Facebook at https://www.facebook.com/studioprodigy.