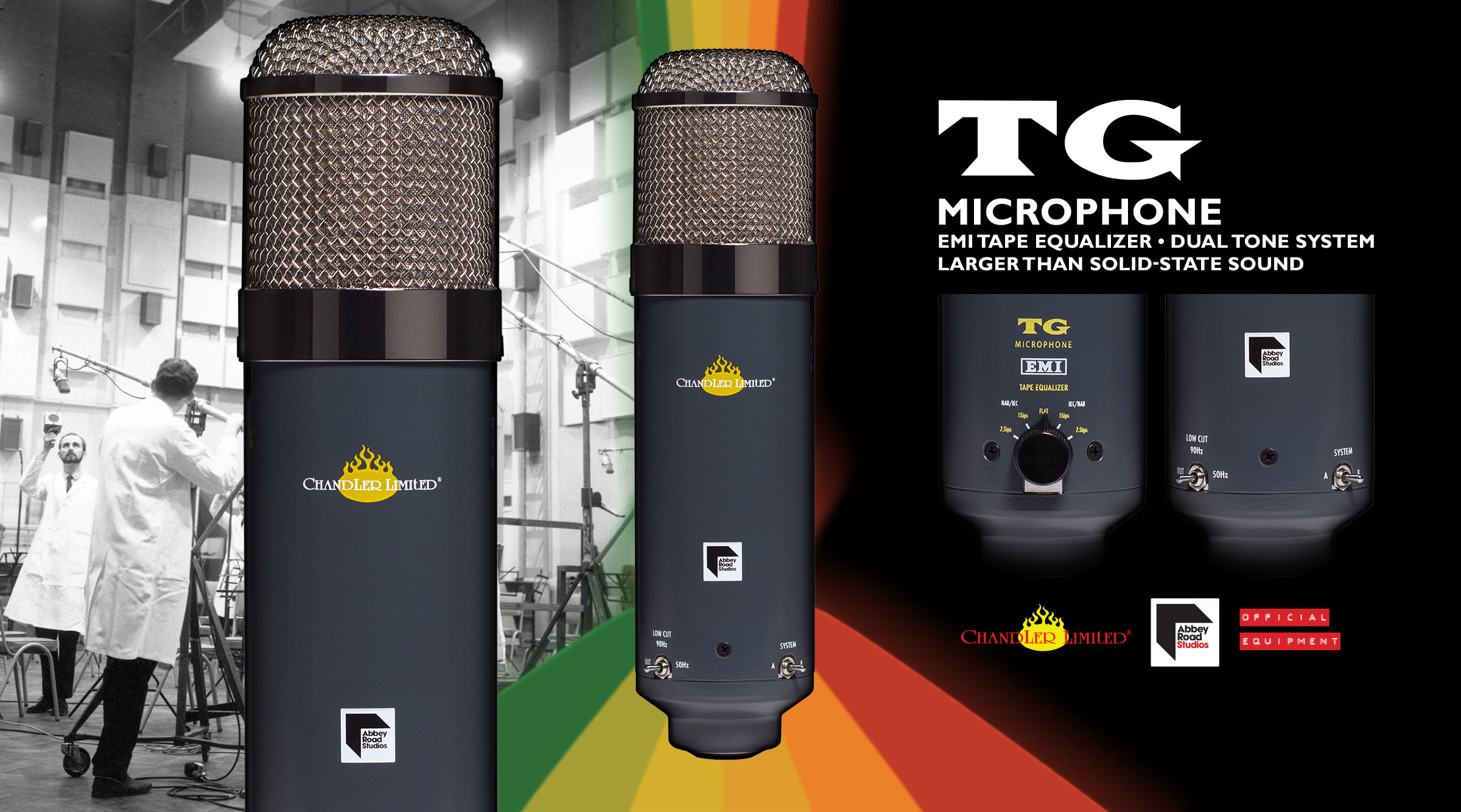 Chandler Limited’s foray into microphones with the wildly successful REDD Microphone, continues the history, heritage and lineage of EMI and Abbey Road Studios, with the addition of the TG Microphone.

While TG Microphone’s historic TG color comes from its incorporation of three TG amplifiers, its ‘larger than solid-state’ sonics are enabled by its reliance on a dedicated power supply rather than traditional 48V phantom power.

Wade Goeke, Chandler Limited Founder and Chief Designer— "I and other engineers have often thought of phantom power as a compromise. It is low current and low voltage when compared to tube mics and is not capable of powering high fidelity circuits that could allow a solid-state mic to compete with a tube design. To me this is why solid-state mics often have a smaller and more 'pinched' sound. Using an external PSU has allowed us to bypass what we consider all the drawbacks of a solid-state mic design and deliver a microphone that can compete with any topology."

The versatility of the TG Microphone is owed to its unique on-board ‘Tape Equalizer’ facility, itself born from vintage EMI TG12410 mastering consoles and applied to great effect in the microphone. The TG Microphone’s tape equalizer allows the recording engineer to sculpt the sound at the source, in lieu of relying on downstream processing.

Historically, the mastering console’s NAB/IEC Tape Equalizer function was used to correctly playback tapes printed on machines of differing standards. Rather than recalibrating a tape machine to playback a NAB master on an IEC calibrated machine—or vice versa—the mastering engineer would select the appropriate playback speed and tape equalizer curve.

Wade Goeke, Chandler Limited Founder and Chief Designer— "I'm lucky to own one of the TG mastering desks. I often run sources through the desk, not to use the mastering equalizers or compressors, but to use the NAB/IEC EQ that is part of its input section; its passive eq section is a special sound I have not heard in any other device. The more I thought about it the more I realized it would be the perfect thing to add to the TG Microphone, not only because of its beautiful tone, but also the wide array of sounds and flexibility it would add to it. Once we re-tuned each setting for recording purposes—instead of mastering—I realized the mic could easily cover the job of a variety of classic mics, however, with even more girth. Thicker FET47 sound for bass? Simply go to setting 5 in system B, fatter vintage C414eb sound? Go to setting 4 in system A etc..."

Adding to the uniqueness and utility of the TG Microphone is the ‘Dual Tone System.’ Conceptually an alternate voicing function, system ‘A’ is characteristically TG mid forward and more open, while system ‘B’ is capable of taking extreme SPLs; anywhere a FET47 would find use, the TG Microphone is at home.

Other features include— switchable Low-Cut filter (90 Hz or 50 Hz,) and 10 dB PAD. The Low-Cut filter—In addition to its traditional purpose—, is intended to act as an additional modifier to the tape equalizer’s settings, thus allowing for more sounds available from the microphone. The result is a greater extension of the TG Microphone’s unique capability to adapt to the source at hand.

During development with EMI / Abbey Road Studios, the famed studios’ audio engineers and technical staff tested the new microphone along-side of some of their historic microphones, and the TG Microphone quickly found favor.

Mirek Stiles, Head of Products, Abbey Road Studios— “I love the sound of this microphone. The hyped tape EQ curves Wade has added really take it to another level. At Abbey Road we compared the TG microphone with some tried and trusted microphone models on all sort of instruments and the TG mic seemed to always come out on top. With so many sound sculpting options I think this microphone offers incredible value, it’s so unique and fun to use. It won’t disappoint.”

Producer, engineer and mixer, Ryan Hewitt was able to put the TG Microphone through its paces during sessions for a major label artist and had this to say— "The new Chandler TG Microphone is totally a modern classic. The different combinations of tape EQ curves, filters and the system A/B switch gave me great versatility in capturing a number of different sources on a recent recording session. I absolutely loved it on electric bass, acoustic guitars, drums and vocals. Any source on which you’d use a classic FET mic, the TG mic just smoked the old standards. The problem is that I need at least four of them!!!"

Producer Dave Cobb is actively experimenting with the TG Microphone and commented— "The TG Microphone is the coolest new mic I’ve heard. I preferred it on guitar over my vintage U67, this was on a small Gretsch combo using tape equalizer setting number '5;' it’s already becoming one of my favorite guitar mics!”

The TG Microphone is mic level output and may be used with the engineer or producer’s preamp of choice; the Chandler Limited REDD.47 Mic amplifier is an excellent combination.

When is the Chandler Limited TG Microphone available for purchase?

The TG Microphone is available for order now.