REDD Microphone Released! Mic and Historic REDD.47 Preamp in One 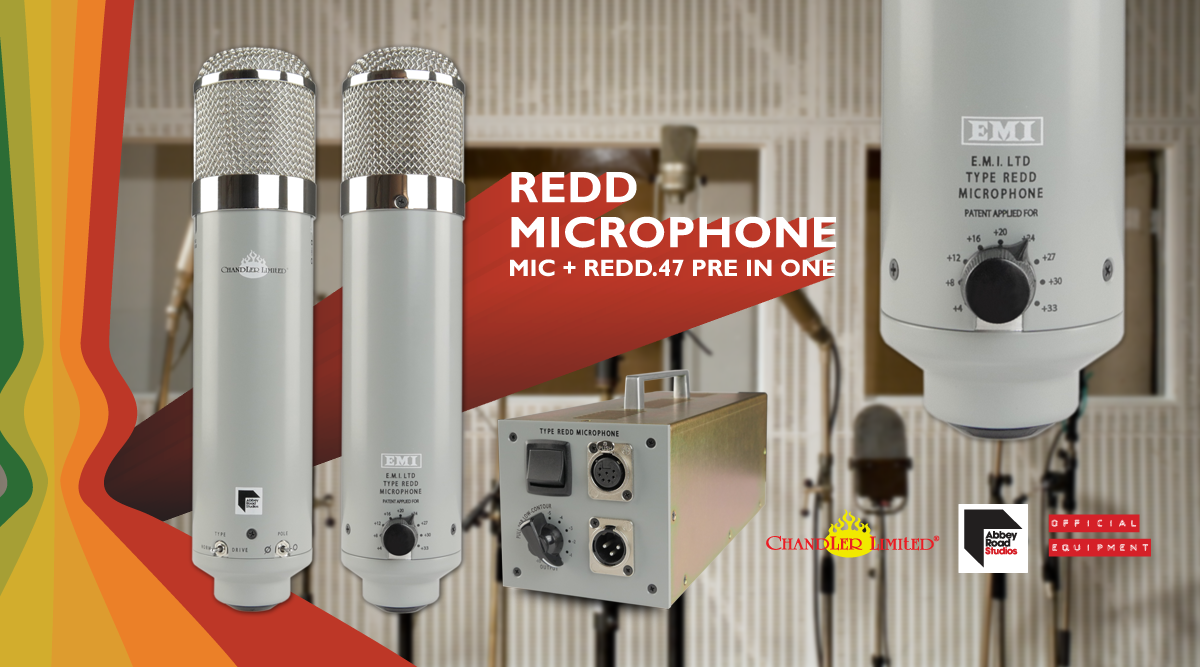 Continuing in the rich tradition of innovation at EMI, dating back to the early 1930s with Alan Blumlein, the father of ‘Stereo’, the company’s first coil microphones, velocity ‘ribbon’ mics and the “Blumlein pair” technique, Chandler Limited and Abbey Road Studios introduce the first new EMI badged microphone in over a half century, the ‘REDD Microphone’.

The Chandler Limited REDD Microphone is a large diaphragm tube condenser microphone, combining mic and preamp into a single, beautifully handcrafted professional recording device. Featuring the vacuum tube based REDD.47 Mic Amplifier circuit directly coupled to a custom handmade premium platinum membrane capsule, the REDD Microphone can be used with or without an external preamplifier.

Visually, the aesthetic is unmistakably classic, an ode to a gilded age of audio; however, the REDD Microphone is not a U-Type clone or derivative of any other microphone.

This new and unique microphone design, with its built-in REDD.47 preamplifier, yields the shortest possible distance between the two most important elements in the recording chain. The result is a microphone that produces a larger than life full-bodied sound with a velvety smooth top-end.

Rigorously tested at Abbey Road Studios against some of the most famous and classic microphones in recording industry history, and on a variety of sources, the REDD microphone excelled.

Abbey Road Studios’ Head of Audio Products, Mirek Stiles had this to say about what the REDD microphone represents- “This project has been a dream come true. Abbey Road and Chandler Limited co-developing the first new microphone to feature the EMI logo in over half a century is a historic moment for the studios. It’s incredible to think Wade has been able to incorporate the classic EMI REDD.47 preamp design into a single microphone unit - this is a game change, the first of its kind. It was really fun trying out different ideas and capsules with the Abbey Road engineers and watching the microphone come to life. The end result is truly a thing of beauty.”

Abbey Road’s former Chief Engineer, Peter Cobbin added- “During the development I have had the opportunity to road test this mic on the best of acoustic applications. Abbey Road has one hell of a mic collection and by making comparisons to other legendary and vintage microphones has given us a serious benchmark to work to.

Typically for recording an artist like Sting I would use 3 classic microphones and choose the best.  For recording rare Stradivarius cellos worth millions I would reach for something really special. On almost every application from acoustic guitars, hand percussion, vocal artists to full symphonic orchestras, in my comparative testing The REDD mic shines above them all.

Switchable full bodied Omni and Cardioid patterns in conjunction with the on-board preamp and tubes allows my recordings to have a deep, warm and rich sonic character. But this well-rounded sound also displays exceptional clarity and detail, which is so compelling especially for recording soloists.

This microphone literally glows and has already become part of my serious audio arsenal.”

The REDD Microphone has been in development for years, and Chandler Limited’s Founder and Chief Designer, Wade Goeke, provided insight into the inspiration for the unique microphone, along with some of it’s unique features- “My initial microphone designs began about six years ago with my concept of including a mic preamp and a microphone in a single unit. Later I began thinking how appropriate it would be to have an Abbey Road microphone that uses historical EMI circuitry and paid homage to those sounds, while at the same time pushing the boundaries of microphone technology.  Being that many of the most classic microphones were made famous by being used at Abbey Road, I felt they deserved a microphone of their own that stood on even ground with past designs. The REDD Microphone has been tested side by side withe mics used to record the Beatles and Pink Floyd, and the results have been beyond expectation.”

Abbey Road Studios’ Technical Services Engineer, Lester Smith, whom has maintained the studios’ microphones since the ‘70s, including classics used by The Beatles, Pink Floyd, Adele, Frank Ocean and countless motion pictures, gave his take on the new addition to historic studios’ mic locker- “After the war, Abbey Road bought the first commercial ‘condenser microphones’ from Neumann in West Berlin. The U47 and U48 valve microphones were loved and used by the many pop groups, singers and classical artists. In fact, these original microphones are still the most popular and in use every day at the studios. Abbey Road always wanted our own special microphone, so consequently worked with Chandler Limited to create this brand new valve microphone. It’s similar in appearance to the original U47 but incorporating a new circuit design and diaphragm together with the EMI designed REDD.47 valve amplifier from the ‘60s. The result is the ‘Chandler/Abbey Road REDD Microphone’, beautiful in style, sound and quality.”