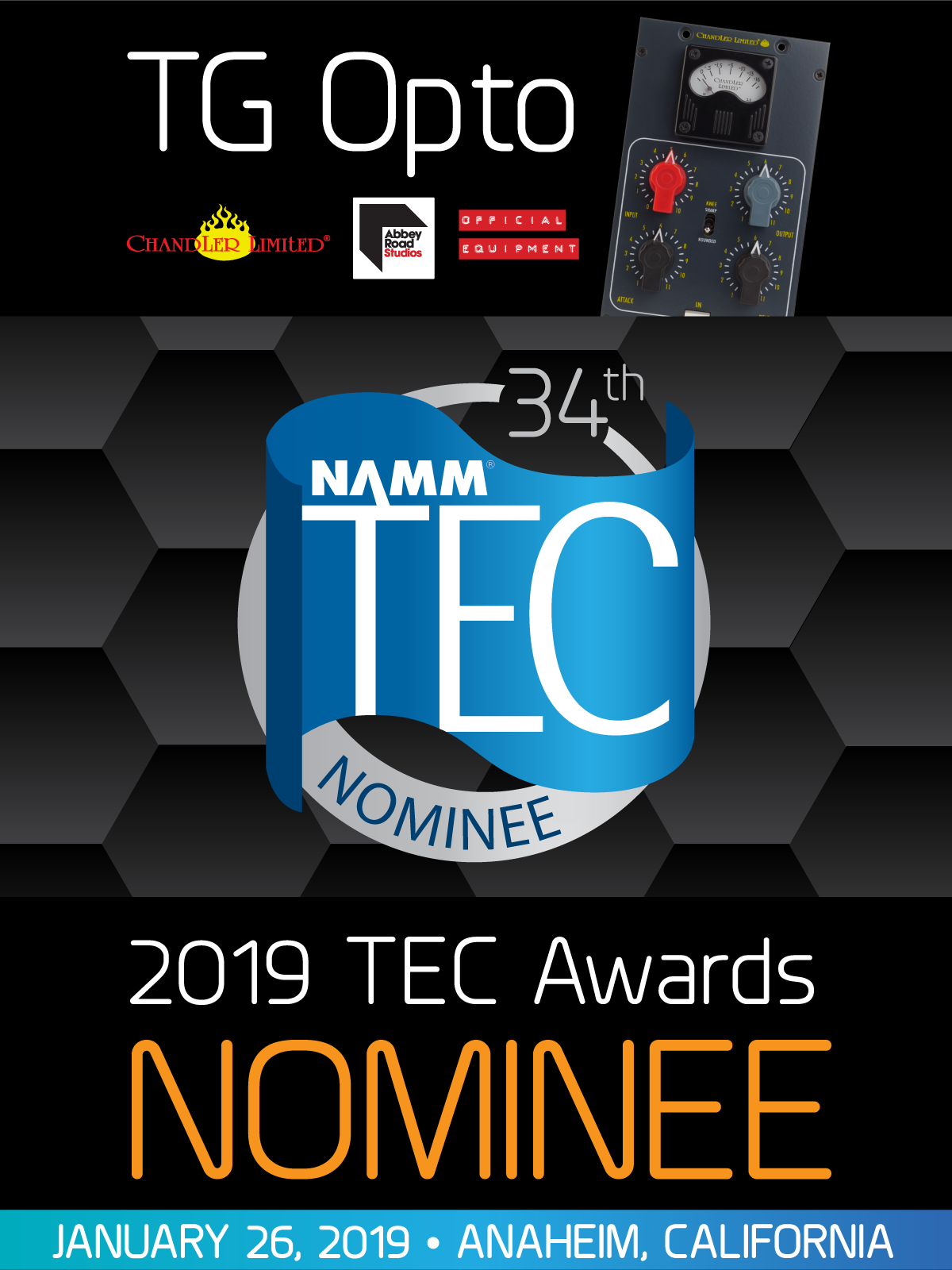 Shell Rock, IA – July 2018… Chandler Limited, the only company in the world authorized to develop, manufacture and market the ‘Official Equipment’ of EMI/Abbey Road Studios, and Abbey Road Studios welcome the nomination of the TG Opto compressor for the NAMM Shows 34th annual NAMM TEC Awards.

The TG Opto compressor for the API 500 Series® format is the latest addition to the highly regarded Chandler Limited EMI/Abbey Road Studios historic series, and the first opto-based compression processor to bare the esteemed EMI brand.

The Chandler Limited TG Opto compressor was launched alongside the TG12345 MKIV (Curve Bender) EQ in the fall of 2017 to great anticipation from audio engineers, music producers, and recording artists dedicated to the legendary EMI TG recording and mastering console sound.

The TG Opto compressor inherits from the TG1 Limiter and TG12413 Zener Limiter, and retains the renowned TG sound and unparalleled ability to crush drums. However, with the adoption of opto detection and the inclusion of a selectable ‘rounded’ knee, the TG Opto is amenable to a wide variety of sources— including vocals and other sensitive content —where the artifact of compression is desired to be less obvious.

Historically, the transistor TG sound traces its origins to November 1968, with the installation of the EMI TG12345 recoding console in Abbey Road Studios’ Studio Two, replacing the REDD.51 valve console and making its debut on a recording by the Shadows. In 1969, the first of its kind, solid-state TG12345 desk, featuring compression and EQ on every channel, would leave its unique sonic character on what would be the Beatles swan song album, ‘Abbey Road’. TG12345 mixing consoles became the main recording desks in use throughout the studio until 1983 and used on many records and film scores including, John Lennon’s ‘Plastic Ono Band’, George Harrison’s ‘All Things Must Pass’, Pink Floyd’s ‘Dark Side of The Moon’ and the soundtrack for Raiders of the Lost Ark.

Today, the TG sound can be heard on countless records across a variety of sources, and more specifically on the vocals of mega artists including, Bruno Mars, Maroon 5 and Katy Perry.

Combined with the previously released TG2-500 Pre Amp, the TG Opto compressor and TG12345 MKIV equalizer complete the chain, creating for the first time ever, a TG channel strip for the industry standard API 500 Series® format.