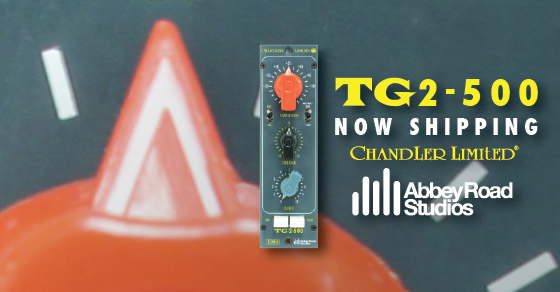 Using the identical TG2 circuit, transistors, and transformers, the TG2-500 delivers 10 – 60 dB of gain and uses a coarse gain control and a fine gain control as found on EMI consoles. The unit provides 300 and 1200 Ohm input impedance as on the TG2, which the company’s customers have come to value.

Equally important, the Chandler TG2-500 delivers frequency response identical to the TG2. Additionally, the TG2-500 has the same high frequency bump and mid forward tone that users enjoy with the TG2, along with the warmth inducing distortion which contributes to its sound. The end result is a creamy, smooth tone with a surprisingly open, clear top end. The sound, as explained by many users, has the ‘warmth and punch’ of the Neve, but with a nicer, expanded top end. 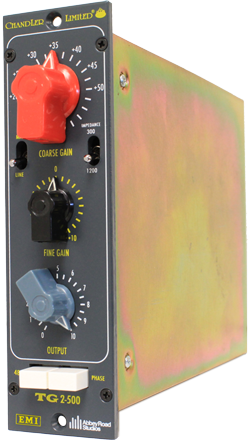 Chandler Limited owner and chief product designer Wade Goeke commented on the company’s new TG2-500 Pre Amp, “The TG2-500 is a product that customers have urged us to develop for several years. In the past, I always commented that I had not yet found the right way to engineer this unit in the 500 series form factor. I’m now pleased to report that, after working on this project for quite some time and attempting a number of different methods in the process, I’ve made everything work to my satisfaction. I’m glad I was patient because I genuinely believe our users will be pleasantly surprised and very pleased with the results!”

Mirek Stiles, Head of Audio Products at Abbey Road Studios stated, “Over the years Abbey Road Studios has hugely enjoyed working with Chandler Limited. Wade’s hardware designs, based on the classic TG technology, are a great way of ensuring this part of the Abbey Road legacy lives on. We are delighted that the TG2 pre amp has now been redesigned to work in the popular 500 series format, enabling a new generation of recording engineers to fall in love with the unique TG sound.”

About Abbey Road Studios
Abbey Road Studios are the most famous recording studios in the world and an iconic symbol of British music. They have been home to countless landmark recordings and pioneering advances in recording technology. Opened in November 1931, Abbey Road Studios were the world’s first purpose-built recording studios. The hallowed building has a phenomenal history spanning over 80 years, during which the studios hosted many of the world’s most famous artists, including the Beatles, Pink Floyd, the Hollies, Kate Bush, Oasis, Florence and the Machine, Adele, and Lady Gaga. Abbey Road is also one of the world’s premiere locations for movie scoring. Since the 1980s, scores for films such as Raiders of the Lost Ark, the Lord of the Rings Trilogy, Braveheart, and The King’s Speech have been recorded there. The list continues with many other major titles, including Shrek, Prometheus, Harry Potter, Skyfall, and The Hobbit.