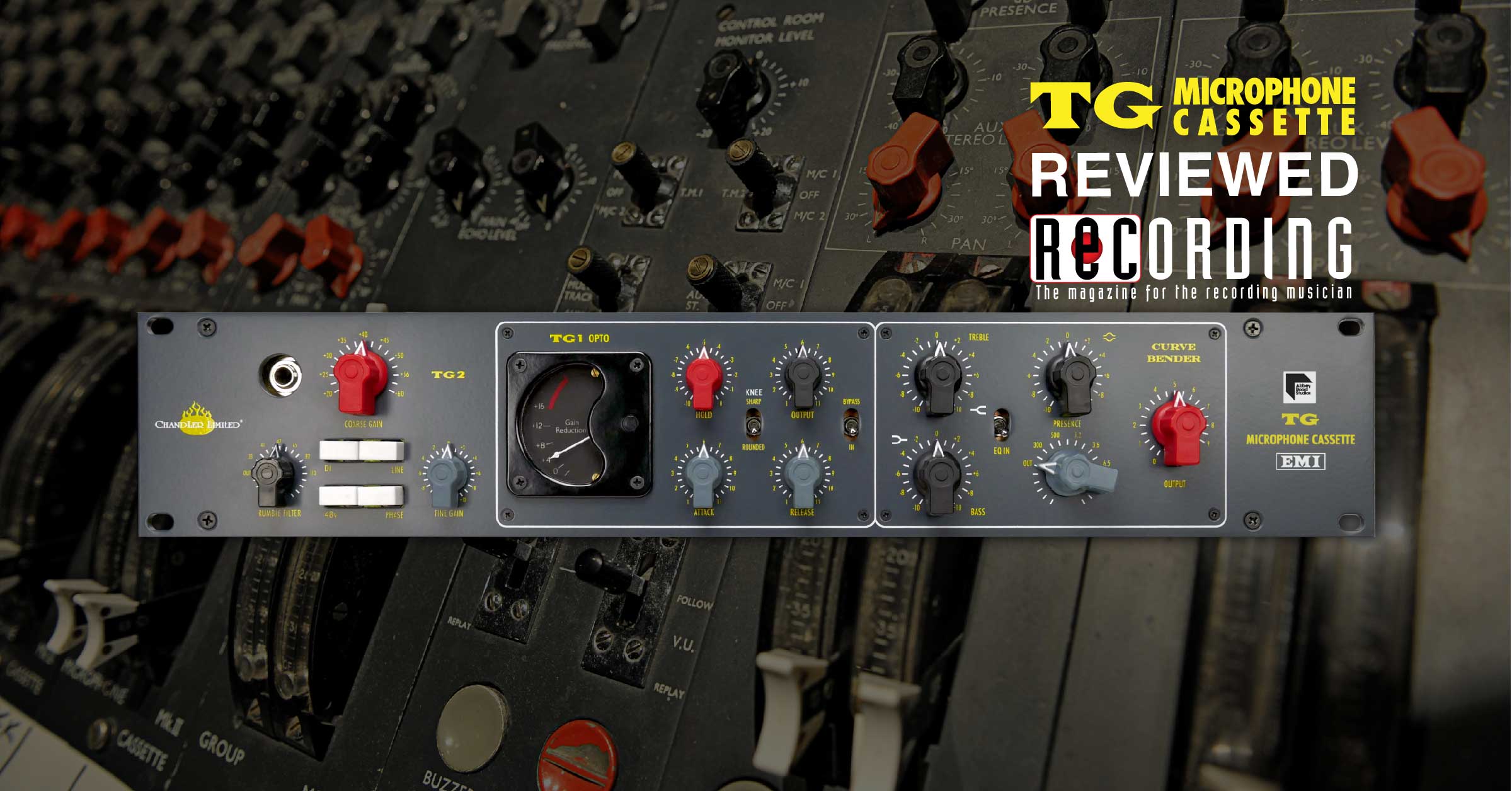 Chandler Limited is an American audio company based in Shell Rock, IA. Chandler has the distinction of being the only authorized company in the world to reproduce historic recreations of classic British EMI recording gear—the equipment used at Abbey Road in the 1960s and 1970s.

Their first of these lines was the TG series, launched in 2001. TG gear is largely based on aspects of the 1968 solid-state TG12345 recording desk, famously used on The Beatles’ final studio album Abbey Road. That LP has a different sonic signature to the band’s earlier output, which was recorded with the REDD tube desks. (Chandler tackles that sound with its REDD series, including the new EMI REDD Microphone that we world-premiered in February 2017.)

The TG series has grown considerably over the last decade and a half. It includes the TG1 limiter, the TG2 2-channel preamp/DI, the TG2-500 500 Series module (reviewed October 2014), the TG-Channel MKII mic pre/EQ, the Zener Limiter, and the Curve Bender EQ. This month we look at the newest TG model: The TG Microphone Cassette.

Back when the TG12345 desk was launched, what we now refer to as a channel strip was dubbed a microphone cassette. Each original cassette was a 2-channel module that contained the usual fare like input attenuation, simple EQ, routing options, panning, and faders. It also had a spreader function and, more importantly, it was one of the first consoles to offer a compressor on every channel. This is the compressor design found in Chandler’s TG1.

Chandler’s TG-Channel MKII is also a channel strip of sorts, combining a mic preamp and EQ. This is the first time designer Wade Goeke has recombined a TG-based preamp, EQ, and compressor into a single device.

This new unit is a 2U 19” single-channel device dressed in EMI-TG dark gray with familiar TG-style chickenhead knobs. Like the rest of the TG series, it requires a Chandler PSU-1 MKII power supply—an extra expense, but one that will power any two TG units.

The TG Microphone Cassette is made up of three components in two sections. It starts with a TG2 microphone preamp and DI which is internally coupled to a 3-band equalizer. Section two is a TG1 compressor, but rather than using the Zener diode bridge of the original, this one features an optoelectronic circuit. Wade’s choice of an opto cell rather than a diode bridge is not as out of left field as it would seem. Unofficial word has it that Abbey Road engineers did experiment with optical compressors, but they were never put into official use.

Around the back, the preamp/EQ section and compressor section each have their own balanced XLR ins and outs. Each section is 100% independent and there is no internal routing between the two. While you could run short XLR cables in a daisy chain on the rear panel, effectively hardwiring the compressor after the EQ, I would recommend wiring both sections to a patchbay for the greatest flexibility. Also on the rear of the unit is a 1/4” TRS jack to link the thresholds of two units’ compressors for stereo use.

The Microphone Cassette’s TG2 preamp is 100% identical to its previous incarnations in sonic terms, but is functionally slightly different. It has the stepped Coarse Gain input found in all TG units, in 5 dB steps from +20 to +60 dB of gain, followed by a variable Fine Gain control (±10 dB) similar to the TG2-500’s.

The four front-panel buttons evoke the original TG2 design. They select the DI input on the upper left, the Line input (useful for using the preamp controls and EQ in mixing situations), 48V phantom power, and phase reverse. It does not offer input impedance switching like previous models.

Added to the TG design is a Rumble Filter that offers six stepped selections of low cut at 33, 41, 47, 65, 82 and 110 Hz. It’s not just a highpass filter, it is also a tone shaper; according to Wade, it uses the same circuit design introduced on the REDD.47 mic preamp.

The EQ section, labeled Curve Bender, is a modern variation of the original found on the TG console. It’s simple and vintage in style but offers expanded frequency choices. According to Wade, “It's spot on with the MKIV TG desks, the only change being spreading out the EQ range, which is like the [Chandler] Curve Bender.”

The last control in the EQ section is the Output knob, which is akin to a fader on a mixing desk (as with the output controls on other TG2 units). Note that the Curve Bender section can be completely bypassed, but the Output control is always active.

The new compressor is essentially a marriage of a new optical design and vintage TG circuitry. I asked Wade why he chose to break with TG12345 tradition and go the optical route? His answer: “We'd already done the TG1/Zener sound, so it started with wanting a slightly different sound, one that makes things sound bigger but not destroyed.”

On its implementation, he explained: “The input section on the compressor uses circuits from a TG mastering desk to replace the diode input section of the TG1. Essentially I did the Opto design and then said, ‘Okay, what TG circuits do I need to make this happen?’. It’s vintage building blocks, but the application is new.”

The compressor centers around a large VU meter like the one on the TG1, but it is not a traditional gain reduction meter. The first control of this section, labeled Hold, is a threshold control that also moves the VU needle (see below). In this vintage EMI paradigm, the meter and Hold are designed to set the amount of compression wanted before signal passes through the unit.

As you turn the Hold knob from fully clockwise to counterclockwise, you will see the white needle of the VU meter move from the top down to the bottom. The farther the needle is to the bottom, the more you are compressing the signal. When signal plays through the compressor, the meter will bounce to the top, but it will always stop where you have preset the needle using the Hold control. The less compression you choose, the less distance the needle bounces, and chances are it will bounce to the top of the red often... which is not a bad thing!

This meter is not about gain reduction, it’s about ballistics. Watching how fast and how high the meter bounces will show you how much you are compressing and how your attack and release are set. It’s vintage and it’s quirky and it does take time to get the hang of it. You’ll also need to occasionally look away and just trust your ears.

In addition to the vintage Hold control, the section has controls for Output (makeup gain), Attack and Release, and a Knee control that goes from approximately 2:1 (Round) up to Sharp, which Wade says is like “infinity and beyond.” (Yes, he really did say that. We can’t make this stuff up.) The compressor can also be bypassed.

I have had five channels of TG preamplification in my studio for over decade, and I have used them on darn near every instrument you can think of (thanks largely to my years as a Content Creator for Sony) on musical styles ranging from rock to jazz, folk to ambient, Celtic, world music, and more. I find the TG sound is beautifully punchy, solid, and sweet, and unlike the “TG2 is for snare and electric guitar” crowd, I have not found a source where it doesn’t excel.

Moving to the Curve Bender/EQ section, it’s humbling that so many classic albums were tracked and mixed with EQ as modest as this. And yet, as simple as these three bands are, they are exceptionally useful for broad-stroke carving and sweetening, especially on the way to “tape”. The frequencies are very well chosen and very forgiving; this is an EQ where you can push the lows and highs up to 10 dB of boost (something Abbey Road engineers had zero qualms doing) while sounding wonderfully smooth.

As implied above, it took some time for me to wrap my brain around the compressor. I found working with a full drum bus mix in mono gave me the best tutorial of how it reacts to transients.

The hybrid TG1/optical design makes it very unique in style. It grabs and releases like an optical compressor, while retaining the classic TG1 speed, slam, and aggression if wanted. The way it grabs, you get not only the transient peak but a touch of the sound before and after, in a cool, fast, rounded way.

I used it on electric guitars, vocals, the drum bus, room mics, snare, bass, and acoustic guitar. My best description is that it animates a sound nicely. I think I liked it best on John Mayer-style plucky blues-rock guitar and on drums of all sorts; I found myself tracking and printing with it just as much as mixing through it.

Like many vintage compressors, it is very sensitive to the levels it is being fed. If you want really gentle compression, back off the input signal. Also, remember when using it with the preamp and EQ sections that the far right Output knob feeds sound into the compressor and is not a master output for the whole unit.

Of all the Chandler TG incarnations so far, this one may be the most special. It sounds amazing, covers both classic and new ground, and is very rewarding to learn and master. It’s a great way to bring every facet of the TG sound into even a small studio.