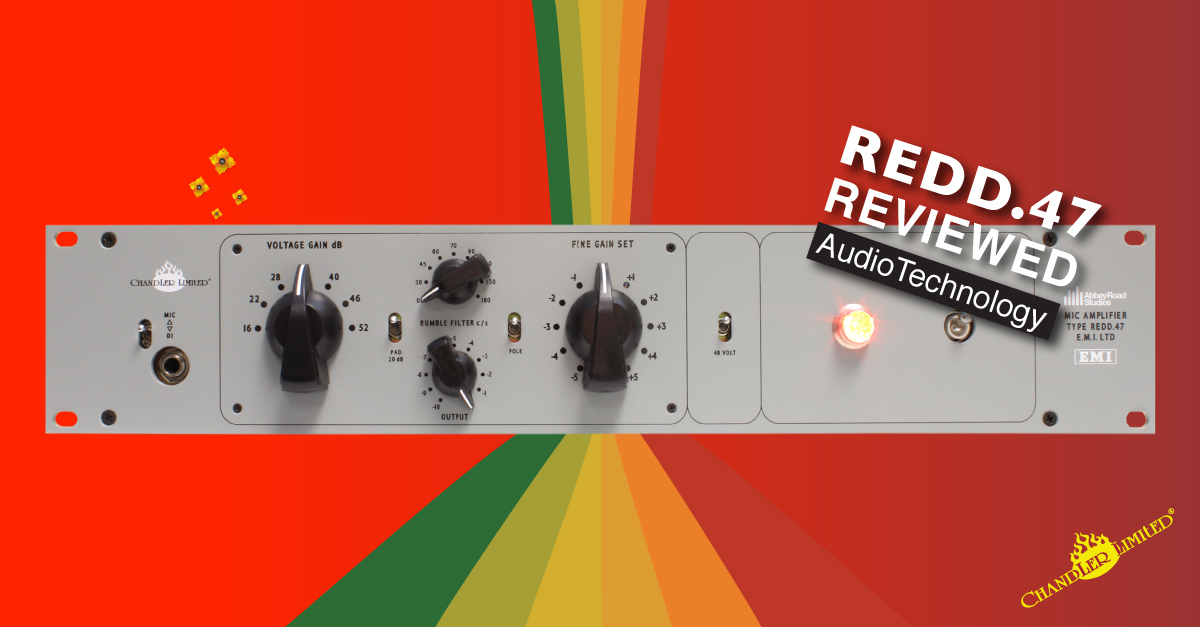 Chandler has retraced the Beatles’ steps back even further in time to the Abbey Road/EMI designs of the ’60s.

With the stamp of approval from Abbey Road studios/EMI, Wade Goeke and his team at Chandler Limited have been riding the wave of audio nostalgia as well as anyone over the last decade. Up until now, Chandler’s focus has been the solid state and earlier germanium circuits that provide the tone and rich harmonic characteristics so many of us are looking for from the ’70s. Now that Chandler has expanded its range to include earlier Abbey Road/EMI 1960s valve designs, it’s a wonder why the company hadn’t delved into that particular treasure trove earlier.

The Redd.47 preamp conjures up the ghosts of the famous and famously rare Redd consoles used on the Beatles albums of the mid to late sixties. The price of admission here is steep and puts this Chandler model under a harsher than normal spotlight when it comes to a review. Personally, I’m not parting with over $3k on a mono preamp unless it will take me into a pretty spectacular earth orbit and let me explore some new audio landscapes along the way. With that thought in mind, let’s hop in the Chandler way-back machine.

My first experiences with the Redd.47 were in the middle of a hectic week of screen composition work for a TV show. I was almost exclusively using ribbon mics to get a warm ‘old worlde’ sound. Switching from an API 512B to the Redd.47 was a bit of an eye-opener, especially in terms of output levels. The Chandler is one of the quieter microphone preamps I’ve used in a while with its maximum +57dB of input gain. I was initially worried about high noise floors using passive ribbon mics, but my fears were misplaced. When quieter sources like soft violins were gained up in Pro Tools, the signals were nicely intact and the noise floor no worse than the API.

The acoustic instruments I recorded (strings, clarinets, double bass, percussion and piano) had a nice velvety quality to them and sat well together in the mix. When I switched to a Zigma Lol-47 condenser for further piano recording I began to see another side of the Chandler. It delivered great clarity and depth on my studio’s ‘character’ piano and there was a subtle harmonic enhancement that I couldn’t quite put my finger on but really liked.

A few days later this same setup got a real workout on a Tim Guy album overdub where the song needed some strong rhythm piano work (a la a certain fab four). No surprise then that these recordings came out spectacularly well. The part nestled straight into the heart of an already well-established mix without requiring any EQ and I was starting to see how recordings made with the Redd.47 could become very addictive indeed.

Next up the Redd.47 got a full workout tracking an entire song from scratch and the pleasant surprises kept coming. Acoustic guitar came out sweet and smooth with a really great tonal balance I hadn’t quite heard out of my battered old Tama before. Even better on electrics where the bite of a Fender amp was more than matched by the Redd.47, delivering a sense of focused aggression using condensers and dynamics. With the right guitar and amp setup I can see Beatles tragics banging out Revolver-esque biting lead breaks through this thing ad infinitum. Once you get a hotter input signal going into the Redd.47 there is plenty of harmonic saturation on tap, and by riding the gain structure you can tune things up for just a little or a lot. On drum overheads and room mics this became a real asset of the Redd.47. I was able to get a beautiful vibey breakup happening on heavy crashes and other louder passages while still retaining plenty of detail and quality in softer sections. Redd.47 owners will definitely keep coming back for more; it’s one of the sweetest sounding preamp saturations to ever land on my studio bench top.

If you want outright fuzz, there is the option of gaining up a DI’d guitar or other source through a preamp and feeding it into the Redd.47’s mic input for your fill of the famous Revolution sound. The technique, pioneered by Geoff Emerick (against Abbey Road regulations), involved daisy-chaining multiple Redd console channels together to push signals into overdrive. The Redd.47 works a treat in this role as a tracking and mix distortion generator. On vocals the Chandler was both smooth and bold and carried my voice in a musically satisfying way. Going straight into the DI delivered a nice balance of body and bite on various bass and electric sources.

RUMBLE IN THE JUNGLE

Having gotten used to working with the Redd.47 at my place, I took it on a three-day location recording job in deepest darkest Brunswick. Sophie Koh had a full-size grand piano on loan in her lounge room and we were starting work on her new album which centres around her beautiful piano playing. The Yamaha C7 is a pro-studio workhorse and while I’ve never rated them as highly as some do, this one did sound great in the room with Sophie driving it.

Miking it up with a range of close and distant stereo mic combinations we found tons of tone but it was hard to get a really sharp focus on the upper mid-range attack of the instrument in the sea of overtones and harmonics. Having tried and abandoned a few extra close miking ideas I settled on a Charter Oak valve condenser about four feet away from the opened top facing the inward curve of the instrument. Plugging this into the Redd.47 and ramping the rumble filter right up to 180Hz I was able to extract a little extra mono focus on the percussive attack of the notes. It put the sonic icing on the cake for what turned out to be a great day of piano tracking.

Late that night we decided to do some rough guide vocals so I plugged a Beyer M88 into the Chandler and we bashed our way through the songs. It was only the next morning I realised I’d left the filter on the whole time and the resulting vocal sounds were actually pretty great. Sophie’s voice did lack a bit of body but the airy tone suited her voice surprisingly well and was a great effect. The filter is very natural sounding even at high settings which makes it far more useable than the more extreme daisy cutter ones I’m used to hearing on preamps. The next two days were taken up with cello and viola overdubs and I used the Redd.47 on both these instruments via the Charter Oak and a Sennheiser MD441 with great results.

Despite using it in a wide variety of applications with a wide range of mics I couldn’t find a chink in the armour of the Redd.47 apart from the minor issue of its comparatively low output levels. All in all I found the Chandler to be extremely musical, versatile and sonically pleasing as well as having a few great creative tricks up its sleeve. For those who can afford the asking price, the Redd.47 is going to be a sweet investment in tone and vibe that will keep you smiling for many years to come.