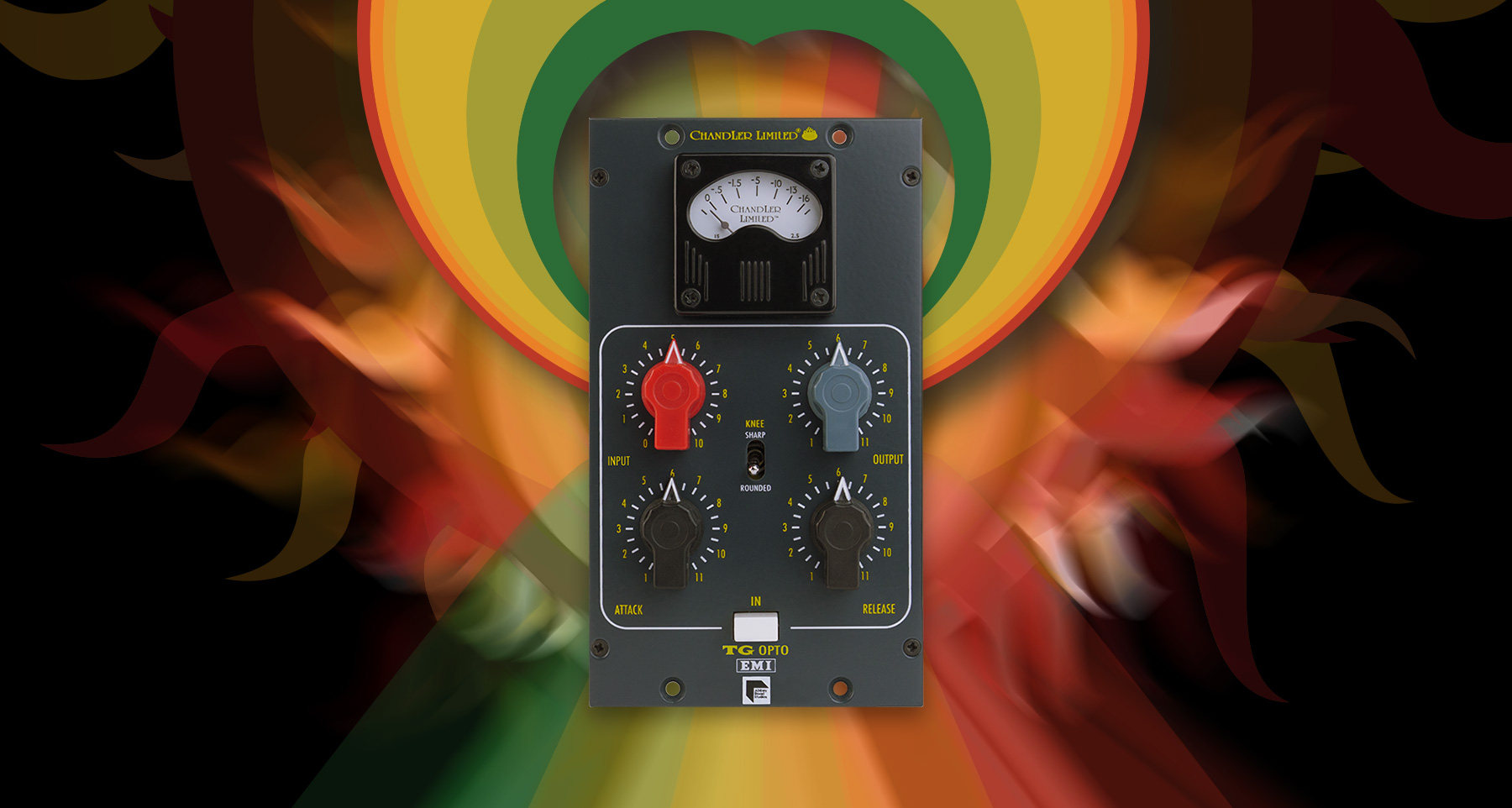 An optical compressor that has four knobs, one meter, one switch, and a single button shouldn't take too many words to review... TG Opto is the latest offering from Chandler Limited in the 500-series format. It's a mono unit, takes up two spaces in the rack, and has a fully discrete transistor circuit. With the exception of how you set the threshold, it is the same compressor section as the TG Microphone Cassette [Tape Op #117] I reviewed last year. It is a close relative of both the EMI TG1 Limiter [#37] and EMI TG12413 Zener Limiter [#59], and traces its lineage to the historic EMI TG12413 limiters found on EMI's original TG12345 mixing and mastering consoles of the late ‘60s and early ‘70s.

I love opto cell compressors for many reasons and on various sources. With tasteful application, and use of your ears, it's a snap to get very musical compression. I use these types of units typically on vocals, bass, and sometimes acoustic guitars. What's cool about the TG Opto is that I found several other uses right away, and didn't get around to even hearing it on a vocal until after a mix was completed, because I felt it was my duty as a reviewer to do so.

With its familiar TG-style chicken head knobs (one red, two black, and one grey), the unit looks both classic and timeless. It is laid out simply and presented in a no-frills fashion. Turning each control felt great – just the right amount of resistance induced precision increases and reductions. The little switch for selecting Sharp or Rounded knee (and it is little) felt good and precise as well. The lettering on the device is quite small, and I needed extra light to read it, but so it goes with packing so much into a 500-series faceplate. The unit is fully encased in metal, and fit well into my BAE 500 Series rack with no issues. I note this because some modules are actually tough to seat, and some faceplates seem to not adhere to any standard.

Many opto compressors, like the venerable Teletronix LA-2A [Tape Op #26], are set via simple input/gain reduction and output controls. The Chandler TG Opto features these Input and Output controls, but a little more shaping capability comes from Attack and Release knobs, and the toggle switch for adjusting the knee. The Input, as is true with most opto compressors, sets the amount of gain reduction. The harder you hit in on the input stage, the more compression is achieved. The difference between this control and the one found on the TG Microphone Cassette is that on the latter, the user sets the amount of gain reduction using a Hold knob, which determines the amount of dynamic range. That feature was slightly counter intuitive to use for me, and on the TG Opto this was a more familiar control option.

At NAMM Show this year, I'd seen Adam Fiori from Chandler Limited demo the unit on drums. For review I was eager to get a drum track of my own passed through this compressor. Because it is a mono unit, I strapped it across a single drum mic and started cranking the knobs around until I reached an up front, semi-aggressive sound. From there I brought it back a touch, to set it in the mix. It brought a nice focus, and a slight rebalancing of the kit's elements. On a more hard-hitting track, while using Sharp mode I got the unit really pumping. The compression artifacts were welcome, and added some real character and excitement. For the more "standard" compression duties I preferred the Rounded mode, as the sound of the compression was less audible but still effective as a dynamics control tool.

I liked the way this unit sounded on acoustic and electric guitars, lead vocals, Wurlitzer keyboards, and percussion tracks. It's got nice tone, as opposed to being invisible, and would be a welcome addition to any 500 Series rack. It's so simple to use, and I was able to get a great sound out of it immediately, which is always a bonus when integrating a new piece of gear. I felt there was zero risk in making a regrettable mistake with the TG Opto, and it integrated seamlessly into my workflow.

The longer I make records, the more I prefer simple tools that do their job and bring something to the party in terms of their character. The Chandler TG Opto Compressor gets full marks! I recommend it highly as a multipurpose compressor.