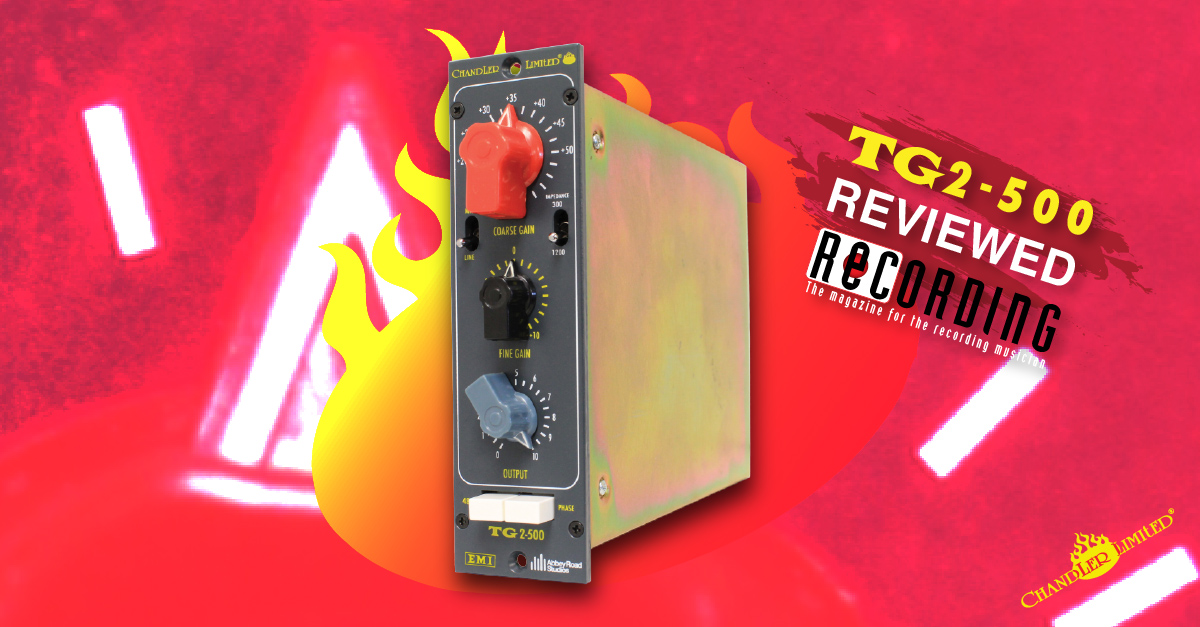 According to its Wikipedia entry, Shell Rock is a city in Butler County, Iowa, located along the Shell Rock River with a population (as of 2010) of 1,296. In fact, if you head on over to said Wikipedia page, you will see a quaint picture of the town’s main drag... and on that little street, behind a trio of adjoining storefronts, is none other than one of the world’s finest audio processing companies.

Celebrating their 15th year in business, Wade Goeke and his company Chandler Limited are known and respected worldwide for compressors, equalizers, microphone preamps, and more. The company boasts four full product lines of studio audio processors (not even including its forays into boutique guitar amps and footpedals!), including the Neve-inspired LTD series, the vintage-flavored Germanium line, and the 500 Series Little Devils. The last of the four, and certainly the one that commands the most attention, is their EMI Series—gear based on vintage consoles and processors found inside of the hallowed walls of the Abbey Road studio complex in England.

At the heart of the EMI-based designs is the TG Series, launched in 2001 with designs based on the circuits found in the original TG-12345 recording desk which was delivered to Abbey Road in 1968 and then used on the Beatles’ final album Abbey Road as well many Pink Floyd albums including Dark Side Of The Moon. This series includes the TG-Channel, the TG-1 Compressor, and the TG2 dual microphone preamp.

This month we will be looking at the first new TG product in over a decade, not counting the similarly EMI-inspired Zener Limiter and Curve Bender. This new item is the TG2-500, and as its numeration implies, it is a single-channel TG Preamp in a 500 Series module enclosure.

Where it all began: the TG2

Before diving into the TG2-500, let’s take a look back at the original TG2 microphone preamp, now in its third incarnation. We didn’t review it when it first came on the scene, so a refresher course on what makes this preamp circuit so special will go a long way toward explaining why the TG2-500 is such a big deal!

The TG2 is a 2-channel microphone preamp in a 19” rack enclosure. It’s built like a battleship in a nickel-plated steel chassis, with a thick heavy faceplate finished in EMI’s classic battleship gray.

Each channel is equipped with pair of vintage chickenhead knobs that are exact reproductions of those found on the original TG-12345 console. The first knob is a stepped input switch with a  range of +5 to +75 dB of gain, and the second is a variable Output pot that is functionally akin to an output fader and used for trimming down the signal by up to –10 dB.

Each channel offers buttons for phase reverse, phantom power (+48V), and impedance switching (1200 or 300 ohm). The DI button mutes the microphone preamp and engages one of the two unbalanced 1/4” instrument inputs, also located on the front panel. The last front-panel control is a Summing switch that, when active, combines both inputs and sends them to output 2. This is handy for blending dual-miked sources like snare drum, kick drum, or guitar cabinet to a single input of your recording device.

On the rear of the unit is each channel’s XLR I/O as well as the power socket which connects to one of Chandler’s PSU-1 MKII power supplies. Sold separately, each power supply has enough juice to power a pair of TG2s or any other of the company’s 19” rack mount boxes.

Internally the TG2 is a Class AB design with all discrete components and balanced Carnhill (St. Ives) input and output transformers. As I mentioned above, there have been multiple variations of the TG2 since its release. According to Wade Goeke, “The changes in the TG2 have been basically cosmetic except for some switching changes. Initially the TG2 didn't have 300 ohm switching, so we added that, and later the Summing switch.” Also note that the original units made use of locking 1/4” jacks.

The new TG2-500 is essentially a single channel of TG2 goodness in a 500 Series module enclosure with a few slight changes. I was curious what (if any) circuit changes were required when cramming all of that circuitry into a 500 Series enclosure, and why it took so long. Wade replied, “The biggest thing that needed to be done, and why I didn't rush into doing the TG2 in 500 Series, is that some rebiasing of the circuit was needed to make it work. Over the last few years, I experimented with a number of different ways to approach that, until I got what I thought sounded as accurate as possible. It’s not hard to make it work, but it’s challenging to make it sound correct. The TG2-500 uses the exact same parts as the TG2—transformers, etc.. The only parts differences are that I used some capacitors that stand on end instead of lay down to free up space.”

While the sound remains the same, real estate is at a premium on any 500 Series device. This necessitated some changes: changing push buttons to toggle switches, as well as a handful of functional alterations. First, the throw of the input gain switch only goes from +20 dB to +50 dB vs +5 to +75 as on the TG2. While it retains the Output control, there is now a third small variable pot labeled Fine Gain with a throw of –10 to +10 dB. This gives the TG2-500 a maximum total gain of 60 dB. This is less than the original, but still quite respectable and easily able to handle most low-powered ribbon and dynamic mics.

The other significant change from the TG2 is that the TG2-500 does not have an instrument input. There is no DI button; it has been replaced by a Mic/Line switch that changes the input from mic level to line level. This lets you use the TG2-500 as an inline mixdown device for adding analog grit and weight to your tracks. All of the other controls—impedance, phantom power and phase—remain the same.

The Chandler TG Series mic preamp, in its various configurations, has accomplished the rare feat of becoming a modern classic, with a similar popularity and reverence as the API 212/512 and the Neve 1073. It has in many instances become synonymous with the sound of modern rock guitar, especially when coupled with a dynamic mic like a Shure SM57, Audix i5, or Sennheiser MD421, or a modern ribbon mic like the Royer R-121. And/or especially a Royer-121 ribbon mic.

Listen to the album Abbey Road and the signature of the TG desk is instantly apparent. Over the years, it has been described as punchy with a solid bottom end, loads of gain, and nice forward top and mid presence. While I would agree with all of the above, I find the most accurate description is found on page 112 of the book Recording The Beatles, where authors Kevin Ryan and Brian Kehew describe the sound of the TG-12345 as “smooth and polished.” I would easily ascribe that to the Chandler TG Series as well.

I must come clean and let you know that I have been using a pair of TG2 units for close to nine years now; the TG2 is a large part of the sound of my studio. While I have a number of other preamps in ones and twos, I have eight channels of Millennia Media HV-3 for when my clients want straight wire with gain, and four channels of TG2 for when they want classic vibe.

As such, I know the sound of this unit well, and here is where I will step up on my soapbox. I typically see the TG2 shortchanged on the Internet, and occasionally in print, as being good for only electric guitars, or maybe kick or snare. This is complete hogwash!

Since the TG2 features a push-pull gain structure, part of its magic is that it can be as clean as you want or as gritty as you need. With its built-in impedance switching, changing the unit to 300 ohm gives your sound a very visceral mid-forward 3D punch.

I have used the TG2 on everything from delicate folk to traditional jazz, ambient electronica and of course rock, prog, and metal. It excels on everything from vocals to acoustic guitar, percussion, violin, mandolin and more—and it’s singled out on electric guitar and drums for a reason!

And this is where I tell you that the new TG2-500 is sonically imperceptible from the TG2 when they are completely matched in level and gain structure. That was a tricky thing to set up; I did find that when I matched the controls as closely as possible, the two units were about 2–3 dB off from one another, and the Fine Gain knob is a tad touchy. Not an exciting conclusion, until you realize that “sonically imperceptible” means you’re getting that sound for the cost of a 500 module...

The only way I can conclude this review is to re-iterate that for me, for the classic sound I crave in my studio, the TG Series microphone preamps may just be my personal favorite microphone preamps of all time. Get yourself some of this.