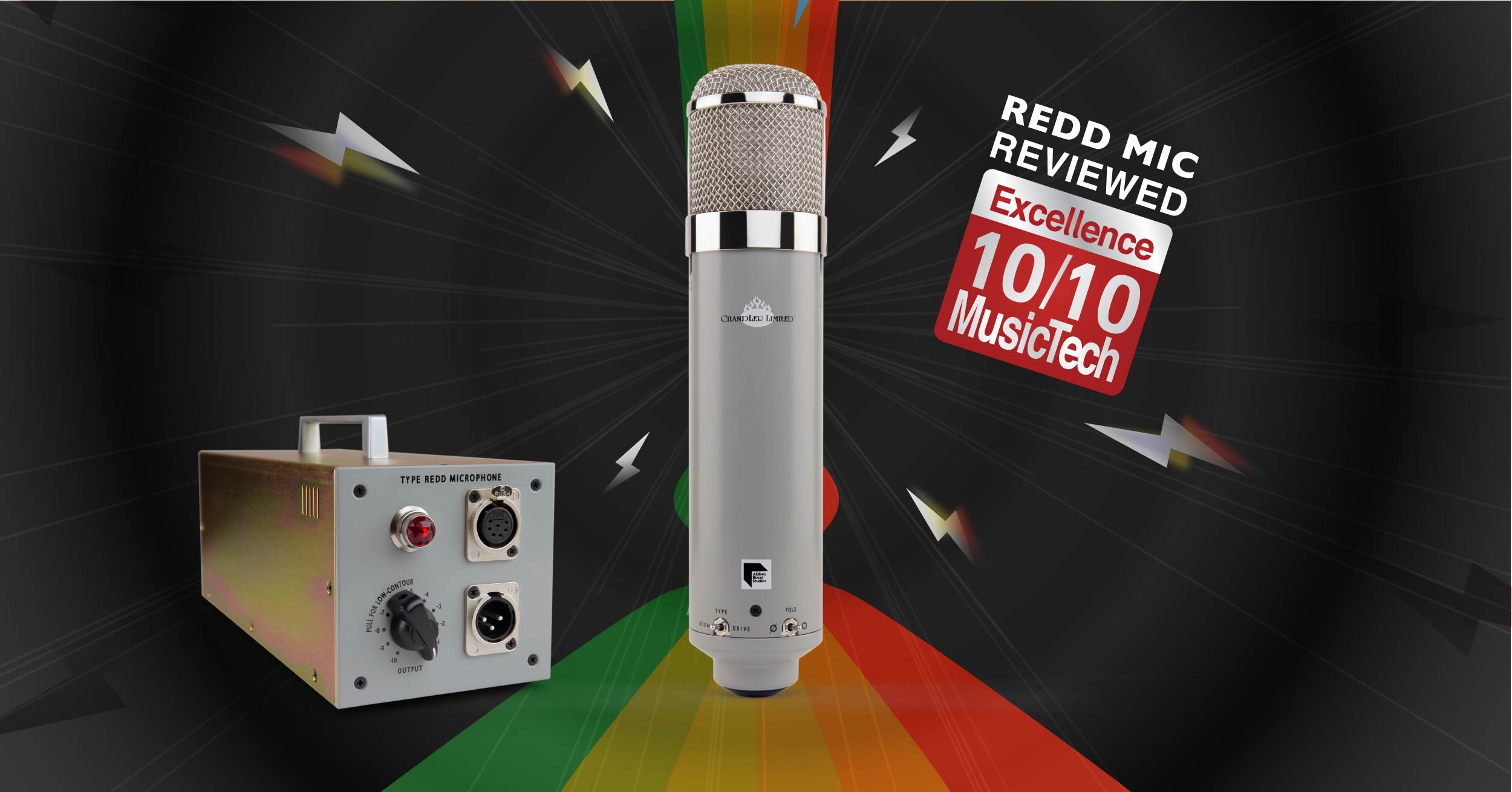 Chandler has teamed up with Abbey Road Studios to create a microphone worthy of the EMI badge and heritage. Mike Hillier finds out if it lives up to the hype…

Chandler’s collaboration with Abbey Road Studios has already resulted in designs inspired by the classic REDD.51 and TG12345 consoles – originally built by EMI’s in-house technicians at Abbey Road – as well as the EMI RS124, itself based on the Altec 436B. Chandler’s designs aren’t exact clones of the original hardware, but instead take inspiration from them, using the same basic circuit design but adding functionality to bring the designs up to date.

However, until now, all of these designs had a predecessor that the new model could be considered to be the offspring of. The latest of these collaborations, however, sees Chandler and Abbey Road innovating with a completely fresh microphone design. The REDD Microphone doesn’t have an obvious ‘parent’ product, but it does borrow some circuitry from the REDD.47 preamp.

It’s a formidable package. The microphone itself is just short of a foot long, with a simple, vintage- inspired aesthetic that evokes classics like the Neumann U 47 or Telefunken ELA M 251. This is exactly the kind of microphone aesthetic that can inspire a great performance. At the top of the body, by the grille, are two switches: one for engaging the 10dB pad, and another for switching the polar pattern. These are recessed into the body, and so allow the microphone to be positioned easily inside the shockmount without being knocked.

However, they are also a little difficult to switch, and we had to use a 2mm precision screwdriver to reach inside and engage the switches. Further down the body are two more rocker switches, for inverting the polarity and selecting between Normal and Drive gain settings, and a nine-position rotary switch on the rear for selecting the amount of gain – from +4dB to +33dB.

These last two controls show what it is about the REDD microphone that is unique. Inside the body, Chandler has been able to fit a specially adapted version of the REDD.47 mic preamp, meaning the output from the REDD microphone is already at 200 Ohm line-level: you can plug it straight into your audio interface and no outboard preamp is required. In fact, Chandler recommends using the mic in this way; although if you dial the gain down, it’s still possible to use the REDD mic with an external mic preamp to get a different type of colouration.

Alongside the microphone, in the flightcase it ships in, is a shockmount and power supply, along with a 25-foot Mogami 7-pin XLR cable for connecting the mic to the power supply. The power supply has one last knob, capable of controlling the tone – an output control that can be pulled out to engage a low-contour voicing, which opens up a totally different sound – more on this later.

Inside the REDD mic is a simplified variant of the REDD.47 preamp: ‘simplified’ because, during design, Chandler discovered several parts of the preamp design simply weren’t necessary if the preamp was placed inside the microphone itself.

However, you’ll still find two unmarked valves – presumably an EF86 pentode and an E88CC triode as found in the REDD.47 preamp – and a custom output transformer. We also spotted a small red LED hanging by the capsule which, when in use, provides a soft, subtle red glow, which we presume is a reference to the mic’s name.

Because of the knobs and switches at the bottom of the mic body, it’s important to remember to feed the microphone through the shockmount headfirst, and not, as we’re more used to doing, the other way around. It’s not all that heavy, and you certainly won’t need a weight to counterbalance it on a boom, but you’re probably going to want to use one of your more sturdy mic stands to avoid any drooping as the session progresses.

We set the REDD up in our vocal booth, patched directly into the A/D convertors. For our first experiments, we started with the microphone about a foot from our vocalist, with the Pop Audio Pop Filter between the two.

With the mic in the cardioid pattern, the level set to 20dB of gain, and the Drive switch in the Normal position, it sounded enormous. The bottom end was very present, and gave our singer a depth of character that no other microphone we’ve tried so far has been able to produce. The midrange was smooth, rich and soulful, while the top end was just a little dark. For thinner-sounding vocalists, this might be the perfect microphone: it brings presence and authority to the sound, without even a touch of compression or EQ.

But for a richer-sounding vocal, we thought it was a little too much, and with no built-in high-pass filter, the bottom end was just too overwhelming. To get around this, we did away with the Pop Filter and repositioned the microphone around three feet from the singing position.

At this kind of distance, the proximity effect ceases to enhance the bottom end, but the mic didn’t thin out at all, and if anything, sounded richer and more open, with an air around the top-end of the vocal that wasn’t there when the vocalist was closer in on the mic.

To compensate for the slight loss in level, we notched the gain up to 24dB, and made further adjustments in Pro Tools to more closely match it with the previous takes. The added benefit of the distance from the mic is that, even in our relatively dry vocal booth, the voice has space around it, helping to alleviate further the problems associated with close mic’ed vocals.

Things started to really get interesting, however, when we engage the Drive switch. On first doing so, the difference seems quite subtle. There’s an obvious boost in gain, of perhaps 2-3dB, but the overall tonal balance remains the same. Yet adjusting for the boost in level and comparing a few takes from before and after engaging the switch, the difference is a clear, soft saturation across the midrange.

This isn’t like hitting an overdrive pedal on a guitar; it’s more like the effect you get from running a signal through an expensive outboard compressor, without the gain reduction. If you’ve ever had the privilege of using a vintage valve compressor during tracking, you’ll instantly know this sound.

Even with no compression at all, the compressor adds a warmth to the signal as it passes through the various transformers and valve gain stages in the unit.

The end result is additional harmonics thickening up the tone and making everything sound simply better. But a good vintage valve compressor is a costly investment. So having all of this built-into the microphone itself, along with the cost a quality preamp would set you back, is a considerable saving – even with the REDD Microphone costing as much as it does.

Once we’d engaged the Drive switch, it was almost impossible to think of a reason to turn it off. It simply made everything we put the REDD mic in front of sound more expensive. We tried it on several very different-sounding vocalists, and every one of them preferred the Drive switch engaged on their vocals. Where opinion differed, however, was in the use of the Contour switch.

In the Standard setting, the mic could be thought of as a touch on the dark side – nothing like what you’d get from a ribbon, but nowhere near the top-end of a modern condenser. Engaging the Contour switch brought about a much more present tone, with less focus on the low end and a more upper-mid- rich tone, with plenty of air around the top of the vocal.

For modern pop vocals, this mode is ideal, and it combines beautifully with the Drive switch. The Contour vocal tone isn’t bright in the way that lesser, inexpensive microphones can be. Instead, it retains a smooth clarity throughout the frequency range and simply fills in the top-end that was missing, bringing the bottom end down a touch and helping toggle room in that range for other voices.

The Contour switch doesn’t roll off the low end in the way a high-pass filter would, and with no filter on the mic, you’ll have to use a separate EQ just to roll off any unwanted low end. However, because the mic sounds so good at a bit of extra distance, the high-pass filtering isn’t quite as necessary as it would be on a close-mic’d source.

The REDD Microphone isn’t simply a vocal mic, either, so once tracking was complete, we put the mic up against the grille of our Vox AC30. Again, the Drive switch brought the most from the signal, while switching between the two Contour modes brought two quite different voices from our guitar. On our Vox, the Standard mode captured a meaty, bluesy tone, with plenty of bite.

We could imagine this sounding incredible on a higher-gain amp. Engaging the Contour brought out the amp hiss a little more, but also helped to push the amp tone forward. Pushing the mic back about 18 inches helped to tame the hiss, while still producing an incredibly ‘forward’, present tone, absolutely ideal for lead guitar solos, or spanky Telecaster rhythm parts.

Finally, we put the mic up about three feet in front of a drum kit, about chest-height in the room and pointed squarely at the snare. For this recording position, we switched the mic into Omni mode, to try and get a more open kit sound, rather than focusing too much on the kick and snare. The sound coming from the one mic was a natural representation of the kit, almost as if we were there in the room.

Pairing this one mic with a pair of Coles 4038s as overheads gave us absolutely everything we’d need for a great-sounding rock drum sound. And where we would often want to add at least a kick, and probably a snare mic or two, we just couldn’t see what adding anything more would bring to the mix. We’d love to see what a stereo pair of REDDs could produce.

The REDD Microphone is a superb piece of kit. Abbey Road’s involvement ensures it has been tested against many of the best vintage microphones in the world, in some of the best-sounding rooms and by some of the best engineers.

All this comes at a price, of course, and the REDD Microphone will be out of the reach of many – though compared to a vintage U 47, the REDD Microphone could be considered cheap! Since it comes with a preamp built in, you can at least factor this into the expense: although, of course, should you split the cost between a mic and a preamp, you would be able to use that preamp with all the other mics in your collection. For studios with a little budget, however, having the REDD Microphone in your locker is the kind of thing that drives artists to your studio, and as an investment, could pay off substantially.