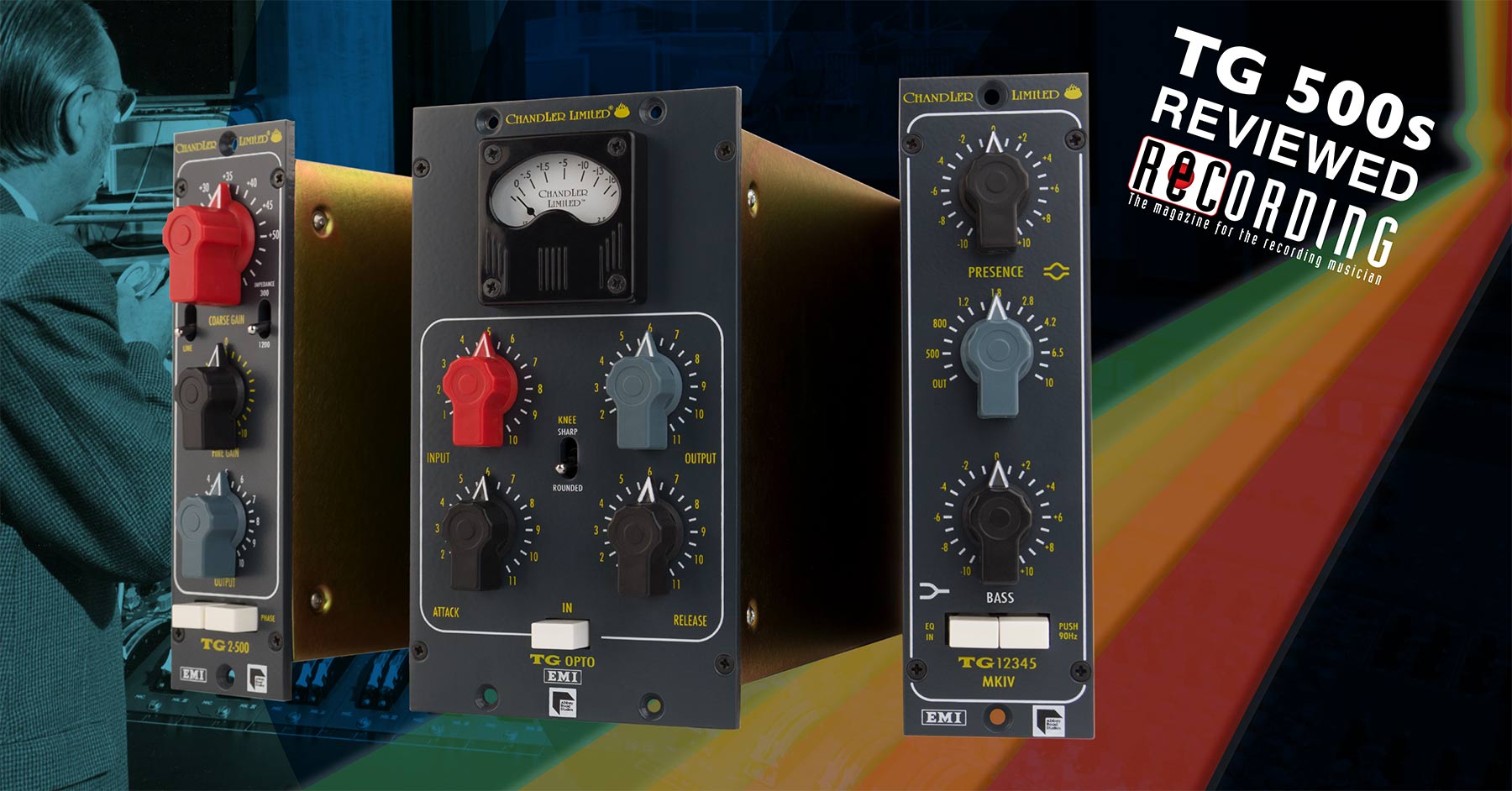 Chandler Limited, based in the unassuming city of Shell Rock, Iowa, is the company that makes spot-on recreations of vintage EMI/Abbey Road recording gear. More importantly, Chandler is the only company in the world that is authorized by Abbey Road Studios to be able to do so. If the words “Abbey Road recording gear” mean nothing to you, I’m not sure we can be friends... but I’ll give you the benefit of the doubt: these are reproductions and new designs inspired by the gear used at Abbey Road Studios in the 1960s and 1970s on sessions by the Beatles, The Hollies, Pink Floyd, and more. How’s that for a pedigree?

Abbey Road’s gear was custom-built by EMI engineers for use only at EMI facilities. That gear, as well as the latest Chandler creations, can largely be distilled into two series based upon two recording desks. The REDD series is based on circuits from the tube-based 1950s/1960s REDD console; the solid-state TG Series console was first commissioned in 1968, and used on the classic albums Abbey Road and Dark Side of the Moon.

Chandler’s founder and chief designer Wade Goeke launched his TG series in 2001, with REDD valve (tube) based products following in 2015. Just last year Wade had the honor of creating the first new EMI-authorized microphone since the 1930s with the REDD microphone, which I reviewed in February 2017.

Fast forward to April of last year, when we took a look at the TG Series’ most ambitious piece to date, the TG Microphone Cassette. Back in the 1960s, a mixing desk’s cassette is what we would now term a channel strip. Chandler’s TG Cassette is a 2U 19" mono channel strip based on the cassette found in the original TG12345 desks. It started with the TG2 microphone preamp, was followed with an expanded Curve Bender-based 3-band equalizer, and rounded out with a new Chandler-designed opto compressor.

The compressors in the original desks used a Zener diode bridge, but Chandler already offers Zener diode-based compression in both the TG1 Compressor and the Zener Limiter. The opto circuit in this compressor is entirely Wade's design; it's only distantly inspired by EMI's occasional experiments with opto circuits.

It probably did not take a crystal ball to figure out that since the TG2 already existed as a standalone 500 series piece, that the opto compressor and EQ might soon follow... and here they are!

The EQ is a mono single-slot module for use in an API-style 500 Series enclosure. As its name states, it is based on the EQ section of the original MKIV TG12345 desk. It is a discrete transistor design and it does vary a tad from the version used in the Chandler TG Cassette. That unit offered a 3-band EQ with fixed High and Low bands and a selectable Presence (mid) band.

The Low band of the 500 Series module offers two fixed choices, selectable with the lower right button. It’s a shelving-only band with ±10 dB of gain at 90 or 150 Hz. The EQ is finished off with a button for true bypass. One note about the curves of the EQ: they are wide and gentle at smaller boosts or cuts, and get tighter and bolder at the center frequency at heavier boosts or cuts.

While taking away the dedicated High band of the TG Cassette may seem like a limitation, I quite like the expanded Presence controls and find the Abbey Road 10 kHz to be pretty magical. The engineers in the 1960s found “10 at 10” to be an often-applicable setting, and I can concur that it’s great on drums and vocals. It’s not so much an “air” sound, but more of a glassy sheen that helps things pop, but not harshly. I also like the added Low band choice, both for boosting and for gently cleaning out mud.

For many, this EQ might seem simplistic in today’s age of 4-band parametrics and beyond, but I actually prefer the simplicity of vintage EQ designs such as this. They’re especially handy during tracking and printing “to tape”, usually at minimal sweetener settings. During mixdown, I also like the forced focus that comes from limited band choices; it avoids the “choice paralysis” that can come from having too many bands and parameters.

The only downside to the MKIV TG12345? This is yet another Chandler module where you will need, or at least want, a pair of them.

The TG Opto Compressor is an EMI-inspired Chandler creation. In its 500 Series version, it’s a 2-slot mono device. Its center is dominated by a miniature vintage-style VU meter, the same as the one found on the Chandler Little Devil 500 Series compressor.

Styled as a vintage opto compressor, its controls are minimal but highly effective and reactive. It starts with the only deviation from the Opto section in the TG Cassette: where the Cassette utilized the vintage-style Hold control found on original EMI compressors, here Wade returned to a more “modern” continuous input like that found on the company’s TG-1. Truth be told, for some the Hold style input-threshold control was confusing, although there is a tutorial available on Recording’s YouTube channel as part of my TG Microphone Cassette review. In that video, I walk through the gain reduction meter Hold control, complete with audio samples... but I suppose not everyone has seen the video, so I’ll give Wade the benefit of the doubt on simplifying this module’s operating mode!

On the 500 Series version, it’s as simple as turning the Input level up. That sends signal into the unit and brings the threshold down on the signal, with the VU meter reacting accordingly and showing gain reduction in decibels. The Output control adjusts the level for makeup gain or to attenuate the signal.

As with the TG Cassette, the TG Opto can be quite fast and aggressive, especially for an optical cell design, but it can also be gentle and round. I will say that it never gets LA-2A slow, but that’s OK... there are dozens of LA-2A-style choices on the market already.

After learning the ins and outs of the Hold control of the TG Cassette’s Opto, I was a bit bummed at going back to a “normal” way of doing things in the 500 Series. That said, I will admit that it is easier to comprehend and set, and allows for more delicate settings—not functionally so much as comprehensionally and ballistically.

There is not much more I can say about the sound of these units that I did not already cover in my TG Microphone Cassette review. To my ears, they sound exactly the same, despite the few minor functional changes. With the addition of 500 Series versions of the EQ and Opto to the existing TG-2 preamp module, this is a great way to build your own TG-based channel strip as your needs and wants dictate. Check them out!